The Convention from 1972 regulates 10 criteria for evaluation of the outstanding universal value, as well as the obligatory conditions for authenticity, integrity and a system for protection and management of the property (Guidelines, § 77-119). “The Ancient City of Nessebar” is inscribed on the World Heritage List according to two of these criteria (third and fourth) with the following grounds:

(iii) The Ancient City of Nessebar is an outstanding testimony of multilayered cultural and historical heritage. It is a place where many civilizations left their tangible traces: archaeological structures from the Second millennium BC, a Greek Black Sea colony with surviving remains of fortifications, a Hellenistic villa and religious buildings from the Antiquity, preserved churches (in some of them preserved only parts of archaeological structures) from the Middle Ages. Nessebar has demonstrated its historical importance as a frontier city on numerous occasions. Having been a remarkable spiritual centre of Christianity for a thousand years, today it is a developing and vibrant urban organism.

(iv) The Ancient City of Nessebar is a unique example of an architectural ensemble with preserved Bulgarian Renaissance structure, and forms a harmonious homogenous entity with the outstanding natural configuration of the rocky peninsular, linked with the continent by a long narrow stretch of land. Its nature and existence is a result of synthesis of long-term human activity, which has witnessed significant historic periods – an urban structure with elements from 2nd millennium BC, classical antiquity, and the Middle Ages; the development of medieval religious architecture with rich plastic and polychrome decoration on its facades in the form of ceramic ornamentation typical for the period; the different stages in the development of the characteristic residential vernacular architecture, which testify to the supreme mastery of the architecture of the Balkans as well as the East Mediterranean region. The vernacular architecture of the urban ensemble, dominated by medieval churches and archaeology, together with the unique coastal relief, combine to produce an urban fabric of the high quality.

In 1983 was adopted, that the property meets also the requirements for authenticity, integrity, protection and management. It was inscribed on the List with boundaries, pointed by the Bulgarian state in the Nomination Dossier (a copy is enclosed of the original “Scheme of the Historical Monuments” to the Dossier – SCHEME № 3: “Scheme of the historical monuments” – Nomination 1982), which should be accepted as legitimate and thus be strictly observed. According to the Guidelines only well-grounded minor modifications of the boundaries are possible, that are sanctioned by the World Heritage Committee, while each more significant modification imposes new nomination of the property. 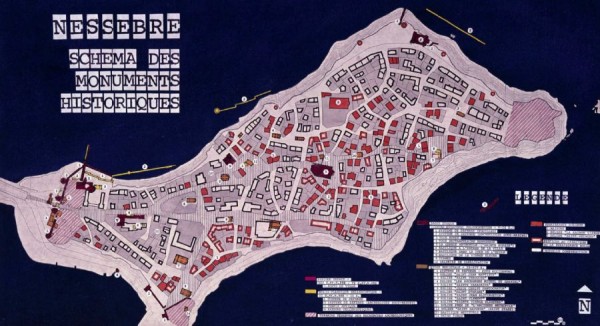 When the property was inscribed its buffer zone was not indicated, as at that time this was not required. Today the buffer zone is a compulsory component of each World Heritage Site, and its functions are to “support” and “give an added layer to” the protection of the property (Guidelines, § 104).

For the needs of the MP was made a detailed analysis of the content and parameters of the outstanding universal value of the property. During the analysis were taken into consideration the recognised values of the single immovable heritage sites, as well as the integral historic urban landscape regarded as a whole, the tangible and intangible dimensions and broader context (in the spirit of the Recommendation of UNESCO).